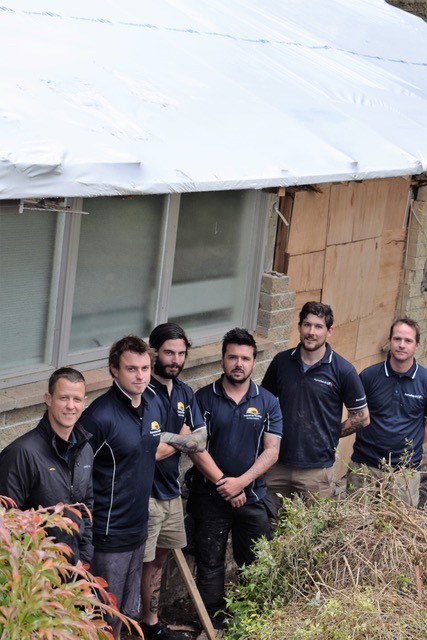 Nick Hatch is the director of Insurance Roofing Services Australia and has been an accredited Stormseal installer for the last two years. We checked in with Nick recently to find out how Stormseal was working for him and what feedback he was getting from his customers. Nick told us that not only has the customer feedback been great, it’s been so good that it’s completely changed the way he does business.

How has Stormseal been working for you?

We never get called back to fix up makesafes anymore. We haven’t had one call-back. In the past, if we put up a tarp, we would get called back after an event. It wouldn’t matter how good you put the tarp on. It would just come off. That’s just the product you were using. But since we’ve been installing Stormseal we haven’t been called back to a job.

What kind of jobs do you use Stormseal for?

Our most common job with Stormseal is roofs. But we’ve also done it on walls and on internal ceilings. With us being a roofing company though, our main objective is to secure someone’s roof. And that’s what the insurance companies mainly use us for.

What kind of customer feedback have you had?

The customer feedback has been very positive. Once they see the end result they say “this is unbelievable”. Not only is their home safe but it looks so much better. And when we’ve gone back to do the permanent repairs, we often hear them say that since we put the Stormseal on there’s been a number of times where it rained and they had no water come in at all.

We don’t get a lot of feedback when we’re doing the initial install. The homeowners just want to have their house safe. But it’s when we’ve gone back to do the repair that they say “this has been amazing”. And they’ll tell us about their friends who had tarps put on in the aftermath of the same weather event and how much worse their experience was: more water getting in during subsequent rainy weather and being kept awake at night with the sound of flapping tarps. That’s the feedback that we’ve gotten. It looks nice and neat and it keeps people safe.

How’s business going at the moment?

It’s going really well. Installing Stormseal is a cheaper method than putting the tarp on. Some people who haven’t heard of Stormseal before think that putting a tarp on is going to be easier because that’s what they’re used to, that’s what they understand.  But the reality is, Stormseal is a lot more time efficient to put on. We got a lot of jobs in Kellyville earlier this year and some of them were 400 square metres. You’d need 10 blokes to tarp it. We were doing it with four.

Why is Stormseal easier to install?

With a tarp they all come in a square, and you can’t join them together properly. With Stormseal you can make whatever size you want. In the aftermath of the Kellyville storms we made custom sizes for each roof in the street, on the spot, and it fitted each house perfectly. A tarp would be one-size-fits-all, which just doesn’t work.

The other thing is, with tarps you can only carry a certain amount around with you in the ute or your trailer. Whereas, with Stormseal you can carry three to four times more than that amount. At one stage we were carrying 2000 square metres in the back of our ute. It would have been physically impossible to fit that much tarp in our vehicles.

How has becoming an accredited Stormseal Installer impacted on your business?

I’ve changed my whole business model for the better thanks to Stormseal. We used to focus mainly on inspections and repairs, but now we’re remodelling our business around Stormseal. The whole focus is on Stormseal now. Because it’s the only product on the market that won’t fail. We know that for a fact.

My main business now is focussing purely on emergency makesafes. We used to focus on doing all sorts of repair. But the feedback we’re getting back from our Stormseal installs is so good that we’re able to market our business primarily on that feature of being able to provide a Stormseal solution for people. We’re focussing on Stormseal as a niche.

Our guarantee is, if you hire us for a makesafe, we’ll only ever charge you once for it. Whereas at the moment in Australia a lot of guys, if they do a makesafe they’ll charge you to go back out. It won’t be long before everyone will be using Stormseal. It’s only going to be a matter of time before it will be the only product that’s allowed.

Why do you say that?

Because it doesn’t fail. When you put it on there, you never need to be called back.

The Australian builder protecting storm victims around the globe
January 21, 2020

Aussie Stormseal innovation a global social impact winner!
October 30, 2019
Recent Articles
About Stormseal
Go to Top
This website uses cookies to improve your experience. We'll assume you're ok with this, but you can opt-out if you wish.Accept Read More
Privacy & Cookies Policy
Necessary Always Enabled