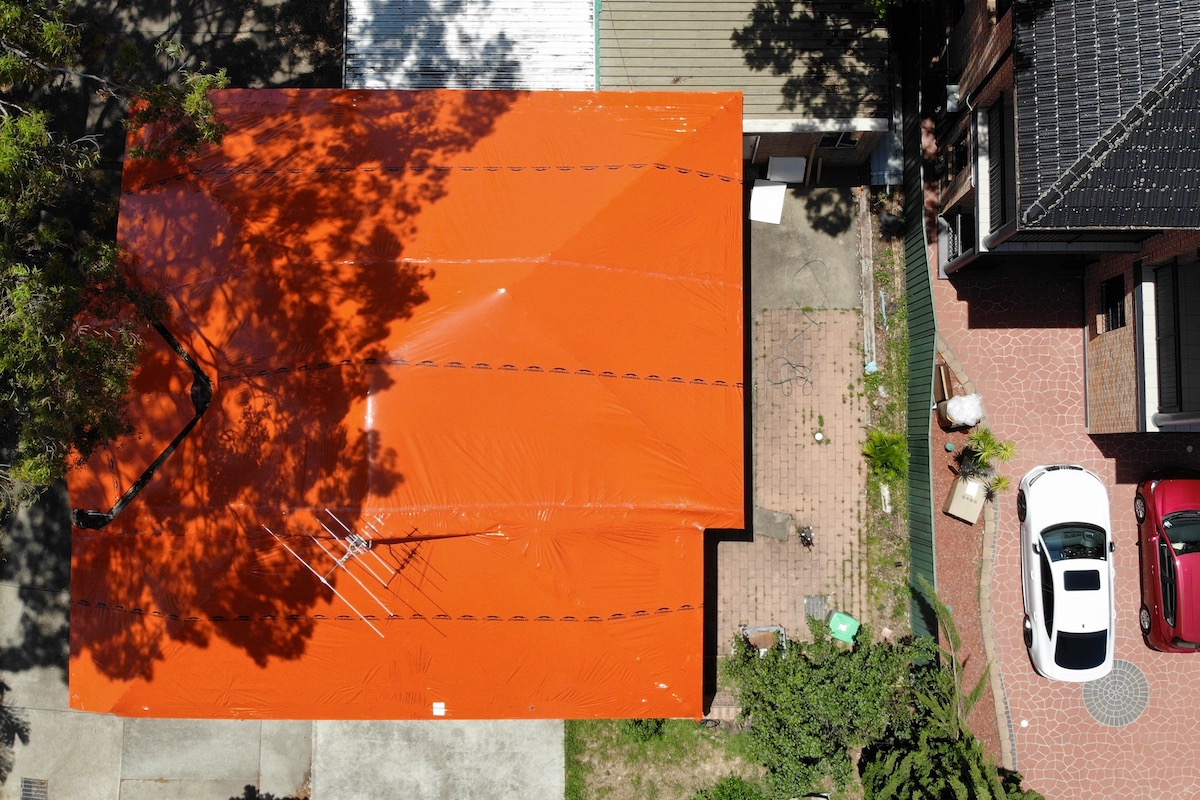 Sally Edwards was home alone when a catastrophic hailstorm hit her Berowra Heights home on 20 December 2018.

‘It was a terrifying experience. Our roof was shattered – we had hundreds of broken tiles and our skylight was destroyed. Then the rain started pouring through in dozens of places.

‘The storm caused damage across a huge area, so of course the SES was inundated with calls. Our insurer was also overwhelmed and couldn’t send anyone to help us for three days, so my partner and neighbours had to get up on our roof and try to cover the worst holes,’ said Sally.

‘The insurance company’s builders came and made patch repairs and installed a tarp with ropes and sandbags. In five weeks, the builders had to come back eight times. But that wasn’t enough to stop the leaking every time it rained. It’s wrecked our carpets, curtains, blinds, ceiling fans and lights.

‘Tarps are a Bandaid solution: they don’t fix the problem and they keep coming off.

‘Then some of our neighbours told me about Stormseal and I saw it on other damaged roofs in the area. I wondered why my insurer wasn’t using Stormseal instead of tarps, because it looked much better,’ Sally said.

‘I called my insurer and said I wanted Stormseal. Just two hours after the insurer approved it, the Stormseal installers from Insurance Roofing Services were putting it on my roof. Since then, we’ve had more rain, which has been a good test. Stormseal is properly waterproof, which is a huge relief.

‘It’s just crazy that insurers aren’t using Stormseal as their default solution instead of tarps. Last night we had high winds through the area and I think pretty much everyone has had their tarps shift but our Stormseal didn’t budge.

‘My neighbour had a huge tarp flip off her roof and go across her power line, she was terrified. We had to call the fire brigade to come and shift it because her insurer couldn’t do anything until this morning.

‘The weeks under tarps were very difficult for us and it’s worse for elderly people and anyone else who can’t manage the physical work of trying to cope with a leaking roof. I’m so glad we have Stormseal now, because if we had to go on under tarps it would be unbearable.

‘I expect it will be at least six months before our roof gets repaired. Imagine how many times the insurer’s builders would have to come back over that period: it would be ridiculous!

‘Without a doubt, our insurer should have put Stormseal on in the first place. It would have saved them many thousands of dollars by preventing all the extra damage and also saved the cost of having their builders come back again and again.

‘And we would have been much happier too.

‘My neighbour saw how well Stormseal held for us and she’s going to ask her insurer for Stormseal today.’

If you and your family are still living under a tarp, ask your insurer for Stormseal. More info here.